Here is the screenshot of official notification issued by CBSE: 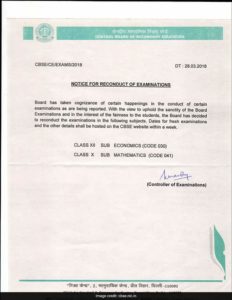 This news would be disheartening for those students who have prepared for the exam day and night only to find it re-conducted again. CBSE should have been more careful and strict with this. The negligence on the part of CBSE has costed the hard-working students of Class 10 and Class 12. The agitation of students can be seen on Social Medias. They are taken aback by the turn of events.

The re-examination dates of Class 12th Economics and Class 10th Mathematics is expected to be announced within a week. It is unclear whether these exams would be re-conducted in Delhi Region or All India.

One thought on “CBSE Class 10 Maths and Class 12th Economics Exams to be Re-conducted !”

This site uses Akismet to reduce spam. Learn how your comment data is processed.